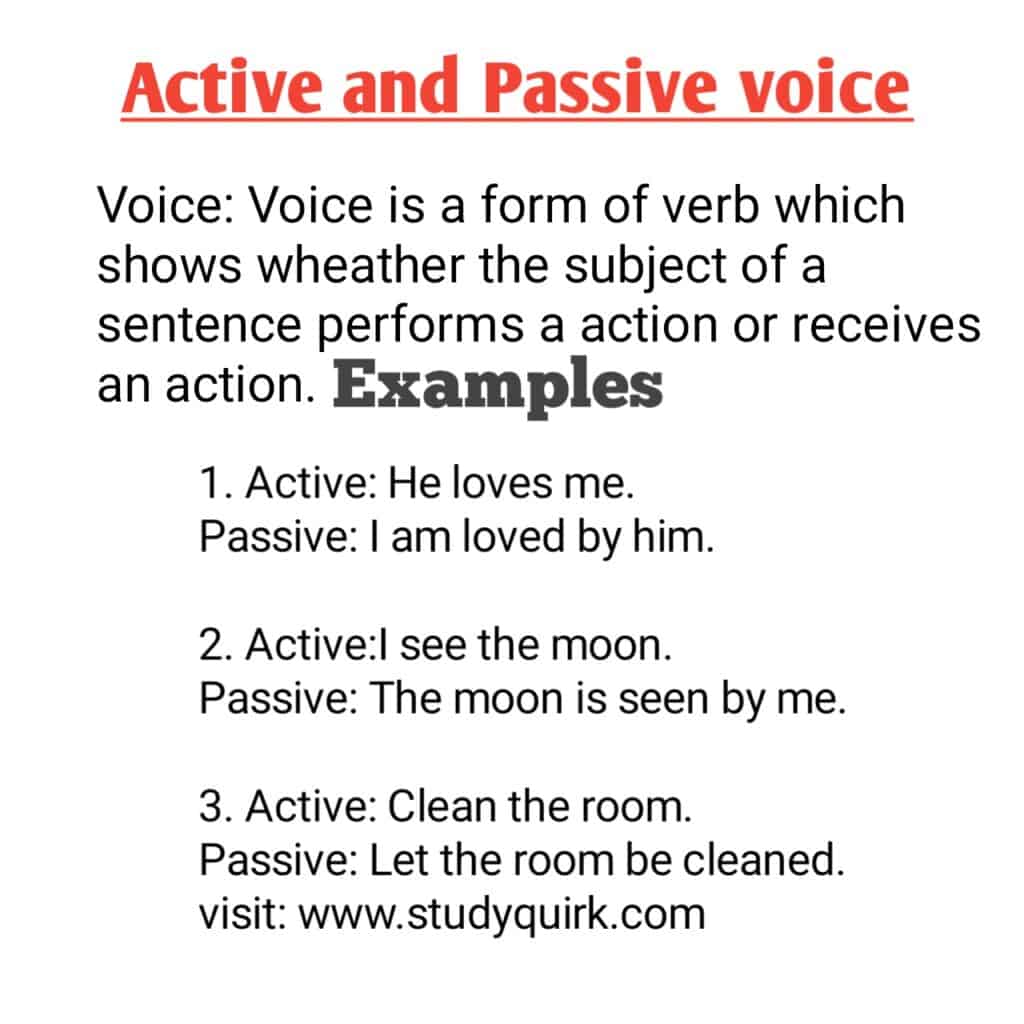 1. and in the active voice, the subject which perform the action expressed by the verbs in a sentence.
2. And in passive voice, the subject accepts the action which is expressed by the verbs. For example:
Active voice: he praises the boy.
Passive voice: the boy is praised by him.
In the first sentence, the action of killing a tiger is done by the subject “He”. He’ is the doer of action so the verb of the sentence is active.
In the second sentence,’ a tiger was killed by him’. Here more emphasis given to the receiver of the action
‘A tiger’ so a tiger is the main subject matter not “He”, therefore, the object ‘a tiger’ in the active voice become the subject in the passive voice.

and If we notice in table no: 1 and we find some specific changes:-

Note: Always use the third form of the verb in passive voice. And the verb should be placed according to the new subject and tense in the passive voice. For example:
Active: I see the moon. which we can change as-
Passive: The moon is seen by me.

Active form and Passive form to be remember:

Subject of active voice which become the object in passive voice in the following way:-
Table no: 2

Active: He loves me.
Passive: I am loved by him. (He becomes him; he is the passive form of he)

Note: In active voice sentence containing certain verb which we cannot transform into passive voice. For example:
Active: He has a new mobile.
Passive: A new mobile is had by him. (Wrong)
Here is a list of verbs which we cannot be change because they are intransitive in nature. These verbs Resemble, agree with, , contain, hold, comprise, lack, suit, fit, , equal. become. etc.

The use of verbs (tense-wise) takes place in the following way:
Table no: 3

Remember: According to the table no: 3  verbs should use before the past participle form of verbs in the passive voice.

Few examples are given below–

Note: to make passive voice, “been” is used in past perfect tense.

Here are given few active and passive voice exercises which will help to understand clearly
change the voice into passive voice
1. Clean the room.
2. Do it now.
3. Ram has met him this morning.
4. The police will soon catch him.
5. Put up a chair there.
6. Please sing a song.
7. Please keep off this road.
8. They laughed at her.
9. He gave me a cap.
10. They called him mahatma.