As you know that noun simply indicates names like John, Ram, Akbar, Dog, Box etc. But this is not the end of it. So every English learner, preparing for any competitive exam, must know in dept of it. In this article we will discuss about the nouns in english, singular and plural nouns with examples, in advanced level that you must know to avoid any errors .

1. Nouns in english rules for singular and plural:

Some nouns always remain in plural form. These nouns have no singular form, and they take plural verb. You must remember these nouns. Such nouns are-

Lets understand it with examples:

Another important  point to remember that some nouns looks like plural in form but actually they are singular in their meaning. And they always take singular verb. These nouns are – 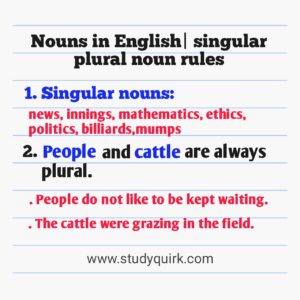 * Remember: That though this nouns in english look like plural in form, is always treated as a singular . see the below sentences

3. Class of a noun singular and plural :

* Remember : That we cannot pluralize such noun by adding –s’ or –es , it is incorrect to write ‘sceneries, informations, furnitures, hairs,

We can make such nouns countable by using piece, kinds, etc. in the following way like-

4.Another important point is that-

Name of certain ailments and of some branches of knowledge or subjects which ends in –s’ are also singular.

*NB:  Do you know that when mathematics means ‘mathematical calculations’ and economics means- “economic facts” then the words are plural like-

5. Some nouns in english have the same form in singular as well as plural. These nouns are –

Here are some examples:

Collective nouns which indicates a unit such as a group (of things) a crowd (of people) a herd (of cattle) a flock (of sheep) a regiment (of soldiers), are usually singular and they take a singular verb.

Thus, noun is not about the names only but it has a deeper function in English grammar. From the above discussion about the singular and plural nouns with examples and their rules are very essential to remember these noun rules for any competitive exam.

* Some important exercises of (singular and plural) noun:

If this article “singular and plural noun“is helpful for you.  Please! Share this information.