In 7 April 1770 in cocker mouth, Lake District, William Wordsworth was born, so he is also known as a lake poet. Wordsworth Samuel Taylor Coleridge and Robert Southey they called Lake Poet, because they all lived in the Lake District. The term Lake Poet given to them by Edinburgh Review– a well known long lasting cultural magazine which lasts from 1802 to 1929.he studied in ST. Johns College, Cambridge.  In his life time he wrote many literary works. And he becomes poet laureate (National poet of England) because of william wordsworth’s poem , in1843. He married at the age of 32 in 1802 with Marry. He died of Pleurisy disease in 23 April 1850. 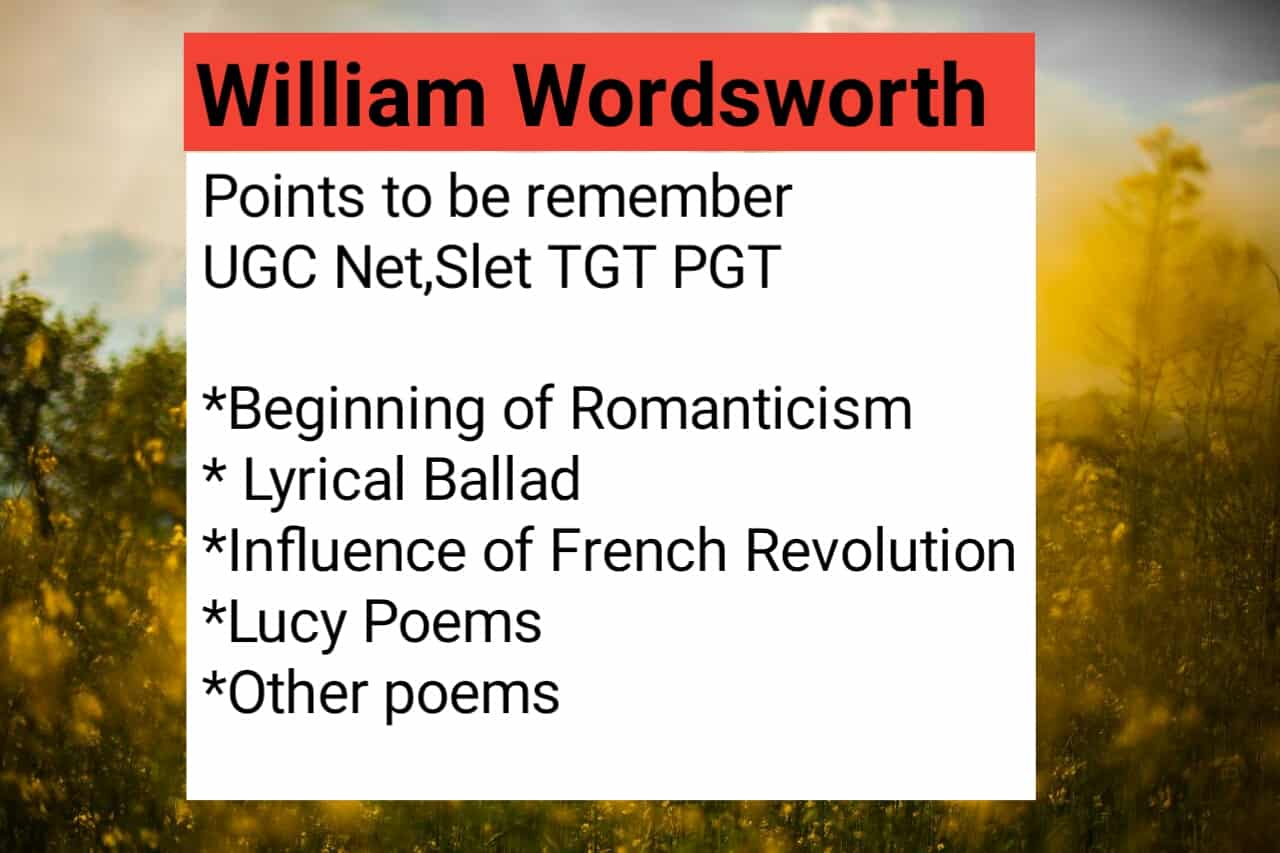 During French revolution a young aspirant poet was so fascinated and thought that he must participate in this revolution and he went to France in1791as a revolutionary figure .and there he fell in love with a beautiful French lady, Annette Vallon and gave birth to a daughter whose name is Caroline. When he realized that the revolution results failure and all the English man were imprisoned and killed, he was under financial crisis because of all these issue him run away from France by leaving his wife Annette vallon and daughter, Caroline.

William Wordsworth’s poem become flourished while he returned to England for the first time he met with ST. Coleridge in 1795 and made a great friendship with him. Wordsworth Coleridge and Dorothy Wordsworth’s sister, they spent lots of time and discuss about neo-classical things and new ideas and tries to come up and finally Wordsworth and Coleridge published a book’ Lyrical Ballad’ which is known as the magnum opus in romanticism.

Point to be remembered

Lyrical ballad is a collection of poem written by Wordsworth and Coleridge.

It has four books,

Third edition  published in 1802 and the

And the last poem “Tintern Abbey” ( by William Wordsworth)

Wordsworth also known as a man in Nature. He loves the company of nature and he believes that nature has the quality to heal the human heart, only nature can heat human heart. He sees nature as a father figure  many of his poem he presents nature as a living being in the poem Daffodils he says “Beside the lake, beneath the trees, Fluttering and dancing in the breeze. Here he says how the flower daffodils fluttering like birds and dancing like a human here he personifies nature.

Descriptive Sketches 1793  here you should remember that this was the first poem of Wordswoth.

Rainbow this poem publishes in 1807 . Here in this poem a child is looking rainbow for the first time and talks about his reaction. The famous opening line of the poem is very important.

“The World is too Much with us” It is another important poem by Wordsworth. It is a sonnet where he criticizes the first industrial revolution  because people starts too much involve in materialism and they are distancing from nature. Wordsworth says Go Back to Nature .He wanted to be close to nature.

This poem written while he was walking with his daughter Caroline on the beach Calais to visit his wife Annette Vallon a French lady .The famous opening line of this poem is-

The holly time is quite as a nun by (Wordsworth)

Lucy poems is a series of five poem published in the second edition of Lyrical Ballad. Where Wordsworth creates a character Lucy, an English girl died in young who lived in a small cottage.

These five poems are-

Thus, william wordsworth’s poem are worldly known. Wordsworth  starts the age of romanticism with Coleridge which is a complete difference genre from neo-classical rule.  In the poetry of Wordsworth emphasis on nobility  goodness of human heart, love for nature . Thus we come to conclusion that romantic poetry talks about great human heart, love, passion, emotion, sympathy,  empathy. Which was against neo-classical standard of writing of artificial literature.